Please click HERE to read about our Covid safety precautions before you visit the Theatre.

People have been sending us their stories and anecdotes about the River Tay, its tributaries and estuary. Tales of people and communities, past and present, capturing the many shades of Tay – its beauty, majesty, power and mystery.

As well as featuring some of these stories via the web-site, we are creating an online archive.

I grew up in the village of Wormit, which is situated on the Firth of Tay at the southern end of the Tay rail bridge. We always had a family dog and would walk them along the beach most days. For years we had Irish terriers, who hated the water and wouldn’t go near it. However, that changed when we acquired a young Border terrier instead.

Our first inkling that things were different this time came when we took him on holiday with us to Highland Perthshire. We parked near a fast-flowing burn to let my father do some painting in the open air. He crossed the bridge to find the best view, while the rest of us settled down on a blanket not very far from the car, with the dog browsing around us. But, as many dogs do, he wanted the whole party to stay together, and he suddenly seemed to realise my father had wandered off. Instead of following him across the bridge, the dog jumped in the burn and, maybe because his feet couldn’t get a grip on the rocks and pebbles under the water, found himself being swept downstream surprisingly fast. Fortunately, my brother and I saw what was going on in time to get to the right place in time to fish him out.

Although I didn’t know it at the time, that was only a trial run for what was to come. During the summer my parents went away on holiday and left me in charge of the house and the dog. I had a friend over to visit one day, and it was such a lovely warm day that we decided to take the dog down to Wormit beach.

About halfway along our usual route, the dog decided to plunge into the Tay, apparently to cool off. I didn’t think anything of it at first, but then he carried on and was quickly out of his depth and swimming quite happily and very energetically.
I began to worry and called him back. He kept going. It started to look as if he was determined to swim out to the middle of the river, or possibly to the far side, which I knew was at least a mile and a half away, with some dangerous currents. I called him again and again, and at last I said to my friend, ‘I’m going to have to go in after him.’

I took off my shoes and then my socks. I was just trying to decide how many clothes I would need to shed when, some distance away, the little head that was all we could see of him stopped its forward progress and began moving back towards us. Not long afterwards the dog made landfall almost exactly where he had entered the water, shook himself, and carried on as if nothing unusual had happened.

That must have been at least fifty years ago, but my friend and I still laugh about it sometimes. We’re lucky it’s a happy memory! I was quite a strong swimmer, but I think the dog was probably better able to look after himself than I was. 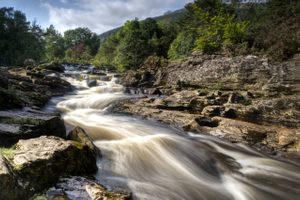