Alastair McIntosh is a writer and thinker who explores our times through the lenses of history, politics, psychology and religion. He is also a frequent BBC broadcaster and an honorary professor at the University of Glasgow. This event launches the new edition of Poacher’s Pilgrimage opening up the Faerie Hill to new audiences. The book is both a meditation and a walk through one of the most difficult, beautiful and remote landscapes in Europe – the West Side of Lewis and Harris.

In its foreword, Alastair calls it his most beautiful book, and Madeleine Bunting, formerly of The Guardian, reviewed it as, ‘as much a journey into an unusual mind as it is about the Island

The John Muir Trust’s journal said, ‘more than a nature book, he considers how religion, faeries and geology have shaped our history, politics, science, spirituality and imagination.

Alastair McIntosh’s books  include Soil and Soul on land reform, Riders on the Storm on climate change, and Poacher’s Pilgrimage on nature, war trauma and spirituality. His writing has been described as “solid on the science” by Prof Katharine Hayhoe, “punctuated by humour, laughter and a twinkle” by Polly Pullar, and “a map that leads the right way” by the late philosopher, Mary Midgley. 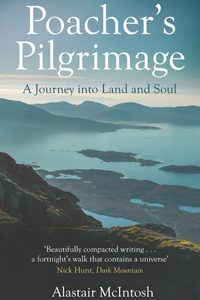 We are thrilled to share our 19th Winter Words Festival, featuring an exciting lineup of well-known, and well-loved authors, playwrights, poets, adventurers, broadcasters, and TV personalities from around Scotland and further afield for a celebration of all things artistic and literary.

This is just one of the many events on offer. If you’re interested in more, why not buy our Winter Words Multibuy Package*, where you can access four fantastic talks for the price of three!  Just add your events to the basket, and we will discount before you pay.

*Makings of a Murderer and Banff Film Festival is not included in the Multibuy package.