Rosemary Goring is a journalist, editor and writer, and currently a columnist with The Herald.

Join Rosemary to hear about her new book which tells the story of Mary’s Scottish years through the often dramatic and atmospheric locations and settings where the events that shaped her life took place and also examines the part Scotland, and its tumultuous court and culture, played in her downfall. Whether or not Mary Stuart emerges blameless or guilty, in this evocative retelling she can be seen for who she really was.

‘Brings into vibrant focus some lesser-known intimate details about the young Queen that make her wholly relatable today.’ Sunday Post

Rosemary Goring is the author of two historical novels, After Flodden and Dacre’s War, and is the editor of the best-selling Scotland: The Autobiography and Scotland: Her Story – The Nation’s History by the Women Who Lived It. She lives in the heart of the Borders, where many of the events in Mary, Queen of Scots’s life took place.

Homecoming: The Scottish Years of Mary, Queen of Scots

Mary Stuart left her homeland for safety in France as a child of five. She returned as an 18-year-old widow to rule a nation riven with factions, dissent and religious strife.Her tumultuous reign ended in abdication and escape to England, where she became the prisoner of her cousin, Elizabeth I, until her execution in 1587.The time Mary spent in Scotland profoundly influenced who she was and what happened to her. Homecoming tells the dramatic story of her Scottish years through the many atmospheric places where the events that shaped her life and the country’s future played out. In doing so it paints a compelling, controversial and poignant portrait of one of history’s most famous and enigmatic queens. 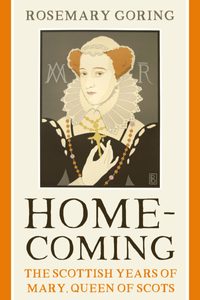 We are thrilled to share our 19th Winter Words Festival, featuring an exciting lineup of well-known, and well-loved authors, playwrights, poets, adventurers, broadcasters, and TV personalities from around Scotland and further afield for a celebration of all things artistic and literary.

This is just one of the many events on offer. If you’re interested in more, why not buy our Winter Words Multibuy Package*, where you can access four fantastic talks for the price of three!  Just add your events to the basket, and we will discount before you pay.

*Makings of a Murderer and Banff Film Festival is not included in the Multibuy package.

Alistair Moffat: Islands of the Evening